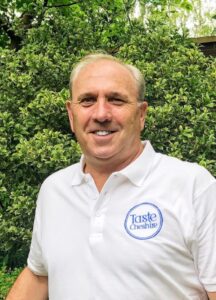 I have been involved in the food and drink industry since 1992, coming up for 30 years. I started Taste Cheshire just over 10 years ago with an aim to support local businesses, producers, wholesalers and retailers. Our goal was simple, to give everyone the chance to experience – a Taste of Cheshire. To a certain degree we have done that, with our 40,000 voter awards that sees standards get better and better every year, the Taste Cheshire Food and Drink Festival, 20 years and still going (despite Covid’s best intentions) and a website and database of members that talks to over 40,000 people every month, but our work is unfinished. A bi-product of all this food and drink work is that I constantly read, see, taste or talk about food and drink in order to try and know more than most about the industry I am involved with and it is in that role that I write to you today.

Last week I had my “eureka” moment. I was invited to an on-line conference that was called “The Agrarian Revolution” and it was during the presentations that the light came on in my head as strong and beaming as anything I can ever remember. I urge you to read on because I now know something, if, what I tell you today isn’t the future then something extremely dramatic is going to happen to the world in which we live. It’s that big.

So, the background first – stick with me, it’s important. There are currently 7.8 billion people on this planet – by 2050, at current rates, it will be closer to 10 billion. A 25% increase. No shock there, although it should start ringing some alarm bells. Now the maths. 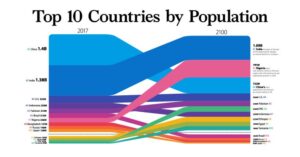 The average human weighs about 185lbs – 13 stone or 85kgs and needs about 2000 calories a day to get through without losing weight or feeling too hungry (most eat more – hence why UK/US is so fat!). In the normal diet, meat/fish proteins, makes up about 25% of that daily intake. That means every day 500 calories per person, around the globe, is used up in the consumption of meat/fish. That’s currently 7.8 billion x 500 calories, a staggering 4 Trillion calories of protein a day just to feed the world, currently. Now it doesn’t take long on the calculator to work out that this figure is going to have to increase by 25% in the next 20 years just to stand still. However, that’s not the frightening part!

The scary bit is that our animal/fish proteins are a very inefficient way of us consuming protein. The most efficient is chicken, but you still have to put 9 calories of food into a chicken to produce 1 calorie of protein – and that’s the most efficient! So, if the world only consumed chicken as their protein, we would have to generate 40 trillion calories of feed per day just to feed the chickens so they can grow, so we can eat them. The figure for beef is astronomical and that is just going to get more and more.

Animals and fish, around the globe are consuming more and more of our crops to produce our proteins, more forests are being demolished to create fields to satisfy that feed demand and it simply isn’t sustainable. But even that’s not the scariest part. Such is the demand for proteins in places like China that mass produced animals/fish are being laced with antibiotics to control the diseases caused by high-intensive farming – and here is where it gets really scary. We are getting so close to viral mutations that can be passed through the food chain to make the diseases we catch immune to antibiotics and once that happens then we are in a very, very bad place. A world where antibiotics simply don’t work anymore. It’s a real possibility if we don’t do something soon.

Hopefully that sets the scene as to many believe the current madness has to end. Apart from the fact that the animals produce a huge amount of methane across the globe and this is also damaging the planet, and that I really hate seeing the faces of all the lambs in the truck next to me on the motorway that I know are destined to die; yes I know that’s pathetic but there it is. This simply isn’t sustainable, on so many fronts. Now that’s all the bad news, all in one go. In simple terms and I am no Greta Thunberg, we have to save everything, the forests, the animals, the atmosphere, the antibiotics, the planet and of course in doing so, ourselves. Tough nut to crack indeed!  Now the good news. There is an answer and as much as you won’t like the idea, it’s going to happen. 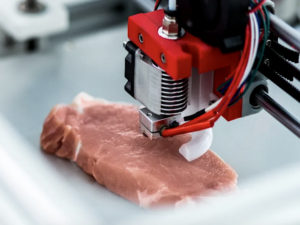 In 2013 Scientists made a cultivated meat burger, apparently it tasted OK, not great but OK but the price to make that burger was an eye watering, $330,000 dollars, clearly not sustainable but a glimpse at the future. In December 2020, in Singapore a restaurant served lab cultivated chicken for just £23 – that’s in just 8 years. In eight years they brought the cost down, to almost parity. Now no-one in their right mind is going to pay £23 for an ordinary piece of chicken when you can have a whole one for £6-8 but the message is clear. We are getting closer and closer to price parity. Parity being where the price of synthetic meats and the price of real meats is the same.

Price is obviously a big barrier but not the main one in our quest to save the world and get everyone eating Plant based proteins or synthetic meats. I can hear you now saying – no way, over my dead body, etc, etc, will I eat that crazed robot fodder. But what about when the price is the same, the texture is the same and the taste is the same? That moment ladies and gentlemen, according to Dr Clare Trippet, is no more than 5-6 years away. That’s all. The plant-based meat products of people like Beyond Meat, the Tattooed Chef and Naturally Splendid are getting better and better, many are not just meat substitutes but good products in their own right – but that alone isn’t going to convince everyone – but this might. The cultured meats that are then 3D printed have the same look, texture and taste, admittedly right now they are still too pricey to sell and they require way more energy to make than they should, but that will come in time. We have always worked out how to do it first then worked out how to do it better and to scale later.

I hear those of you who don’t know me saying, well he would say that he’s a vegan, he’s a vegetarian, at the very least a flexitarian – nope, none of those. I love meat, eat meat almost every day of my life and I am a significant part of the problem, but I know this simply can’t and won’t go on. The Agrarian Revolution is upon us.

The reasons why this will happen are just too strong.

Those are all the negative reason why it should be our duty to change things, but we all know that with our current consumption we should be buying local and buying local artisan products because they are better for everyone – but we still don’t do it and why? Mostly because of lack of availability and of course the price. However, when these plant-based/synthetic proteins are

Then there will be no reason why you won’t do what’s right. Sure, there will be push back in the older age groups but Generation Z want to do the right thing and this product will grow up with them – and they will feed it to their kids and it will be just a memory, where two generations from now they accuse us of having been barbaric and mass slaughtering animals for our own gratification. Hell, they may even rip down statues for that very reason! 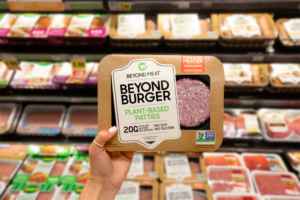 So, my advice is simple. Find out more about Plant Based Meat Products and start trying different foods at home and educating your kids. If you are a protein producer, I’m sorry, the writing is on the wall, I have seen the future and its close, real close, learn how to adapt. There will always be a place for farmers and farms, you might have to learn new skills, raise different crops but the market will be there and you will make good money. You just have to adapt.

And finally, if you fancy making some serious money and aren’t a farmer then find out about the companies who produce these products. I’m no stockbroker but the analogy provided last week was that this industry is like looking at the Silicon Valley in the 1970’s, before the internet. Right now, you will have the opportunity to buy a Google, Apple, Microsoft, etc at pennies and not thousands of pounds as they are today. Sadly, I can’t tell you which ones will become those companies but some who are around now most definitely will. We will all be living in a part of something that is simply, truly amazing and we might just make a generational amount of money along the way, now that would be nice.

In upcoming articles I will do a series of features on companies who are doing 3D printing of meats, creating new products from cells of animals and recreating substitute products from abundant crop sources. All with a view to us better understanding this incredible new revolution and the way it is developing around us. Make no mistake, even if you say you will never, ever, eat a synthetic meat product, it will be a ”thing” and such a big “thing” that those who don’t move with it will simply be left behind. This is the future in my humble opinion.