Time Flies When You’re Having RUM!

Its National Rum Day on Saturday 16th August and seeing as this is my fave spirit of all time (well, ever since it was World Whisky Day on 15th May anyway), I thought we should mark the occasion with a little rum tour of some of my fave bars in Chester.

Whether it’s a rum cocktail, short and mixer or straight down the hatch – rum is where its at right now so let’s celebrate some of our best bars and bartenders with their very own tropical and classic cocktail mixes.

And as Robert Louis Stevenson said – ‘If you keep on drinking rum, the world will soon be quit of a very dirty scoundrel.” 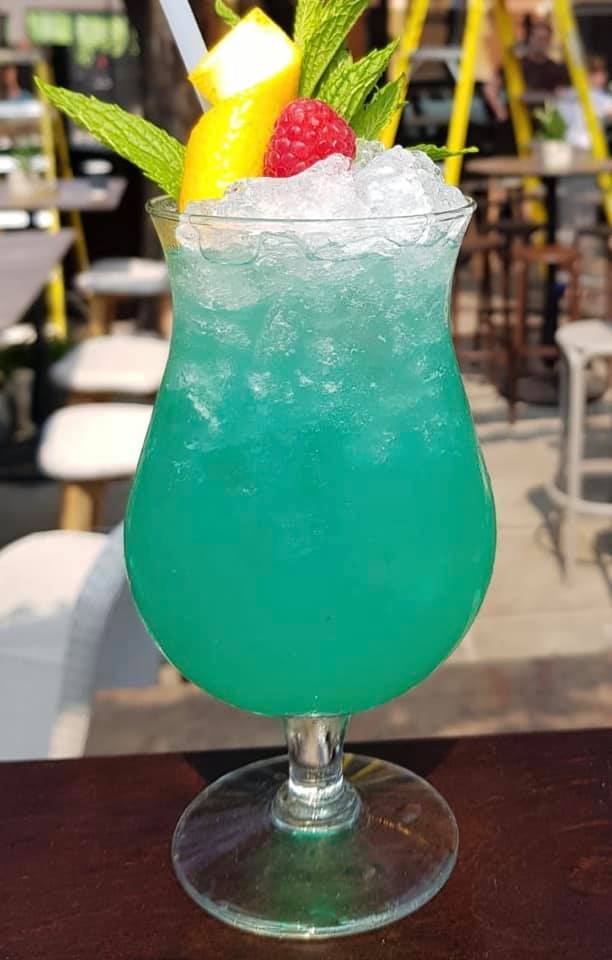 Thank the lord Barlounge reopens this weekend! How we have missed you beloved Barlounge! I am sure they will have made some pretty amazing changes as they re-emerge from lockdown (personally I cannot wait to see the all-new terrace tomorrow evening), but one thing will not have changed. Rick Warrier makes awesome drinks. Its written in Chester folklore – and I’m as pleased as punch that he has contributed to my Chester Rum Story with The Rubix Cuba! Havana 3YO rum, blue curaçao, coconut, passion fruit and pineapple. Perfect for the heat wave, this tropical belter was on the Barlounge cocktail list five years ago, and is making a comeback on August’s cocktail collection. Yes please Rick! 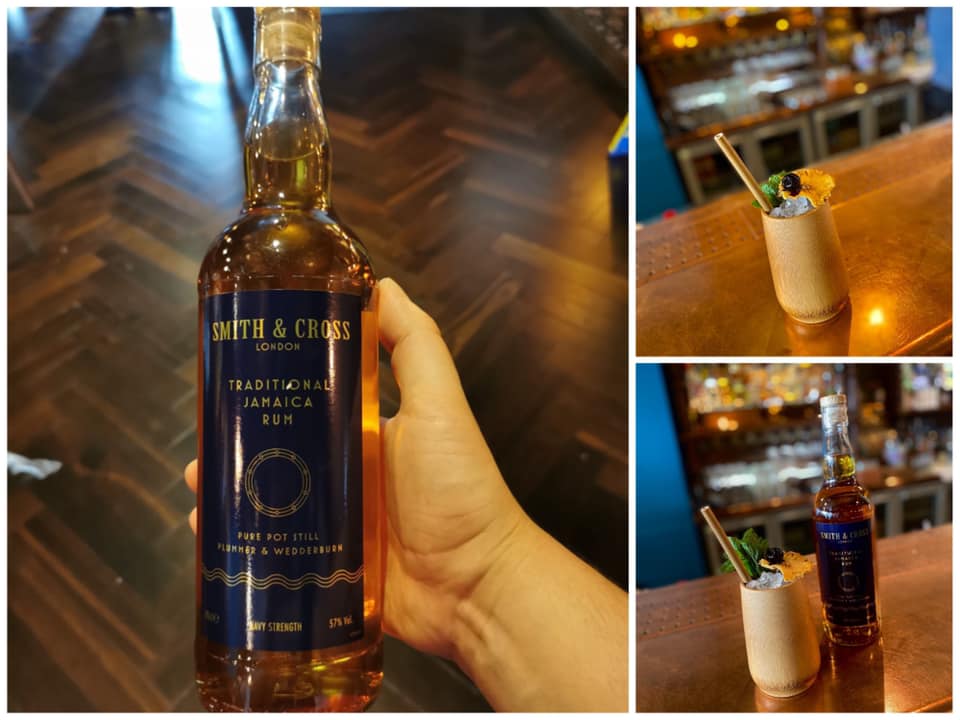 Mr Martyn Holloway is quite a big deal round these parts. He kinda WON the Barlounge hosted cocktail competition back in February (that was the most fun thing that has happened in 2020 so far), so I couldn’t create a Chester Rum Story without him. Martyn’s favourite rum is Smith & Cross as its rich and aromatic, but most importantly because its strong (just like you Martyn!).

Martyn’s favourite rum cocktail is Mai Tai (the Caretakers interpretation of Trader Vic’s).
A heady mix of Smith & Cross, Cointreau, Freshly squeezed Lime juice, Orgeat (basically a cordial flavoured with almond water, homemade is always best!) and pineapple juice (not from concentrate!) Shaken, strained over crushed ice in your favourite tropical tiki cup! Garnish with all of the tropical goods!

Love it Martyn – I’ll be ordering one of these over the weekend as you guys are back in business this weekend! 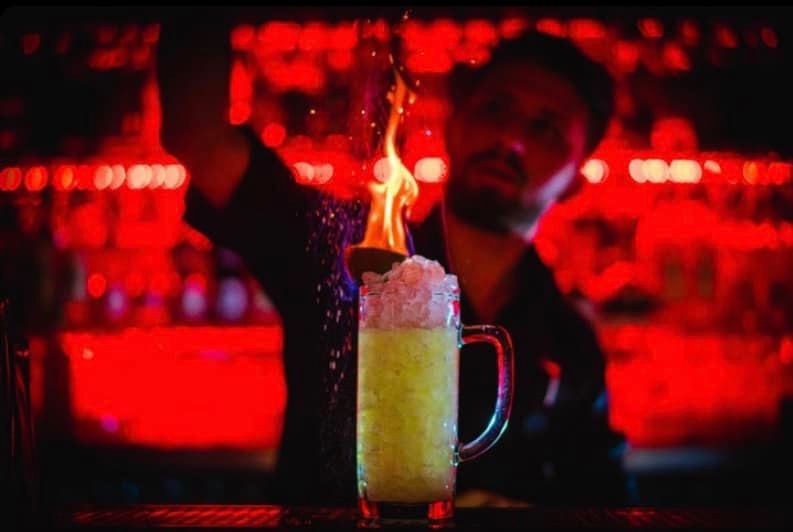 Kuckoo Rocks! So glad these guys have reopened and no drinks story could ever be complete without a word from the man himself, Ryan Maughan. Ryan has chosen Kuckoo’s variation of the Zombie, designed for the hardened Notherner and not for the faint hearted. All things Rum, Tiki and delicious – but don’t be fooled by the tantalising smooth tropical taste. Under all of that loveliness lies a highly potent, balanced concoction of quality rum, absinthe and liqueurs. Originally designed to get you through a hangover but instead causes a Zombified state. WARNING; Please drink responsibly and watch out for the fresh air sniper. Will do Ryan! 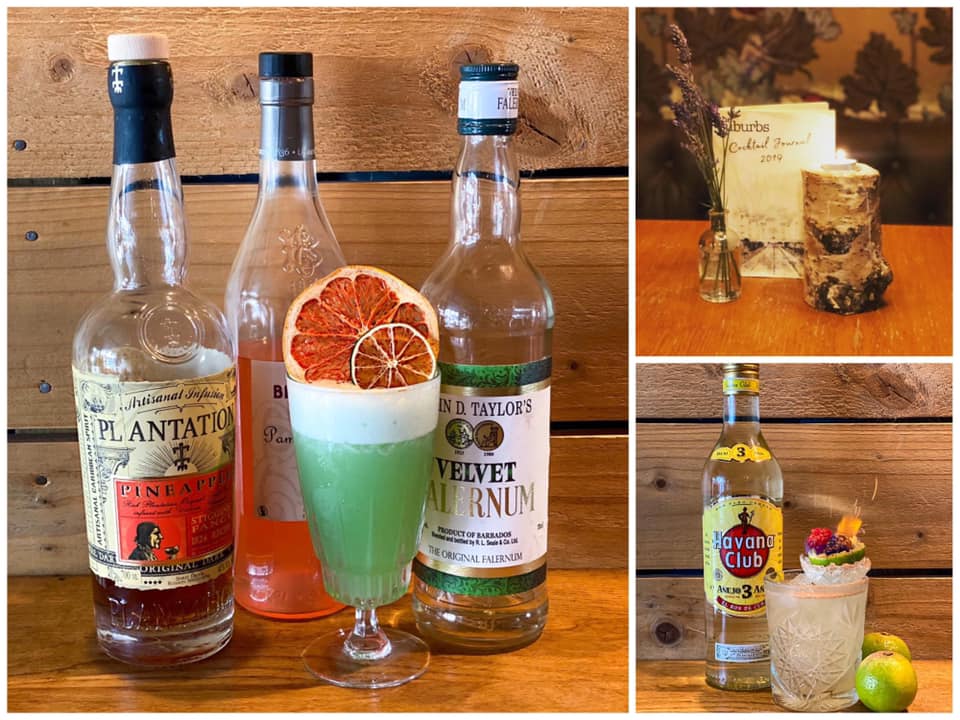 Kingdom has told me this lovely little rum story …

This drink was inspired by a trip to Japan and the discovery of a little cheeky tiki dive bar. The reason he chose to make it was because the drink talked to him a lot through pineapple plantation and the subtle notes of the pomplemousse rose. The bar tender who made the drink for him created such an awesome customer experience with the theatrical presentation and creation of the beautiful green and pink notes of the drink itself. Sounds divine, I want one!

Also, a Suburbs Twist on a Canchanchara with Havana 3YO – a Cuban bev created in Trinidad, one of Cuba’s oldest cocktails specifically drank in celebration. It’s nearly the weekend, so let’s celebrate! Thanks Kingdom. 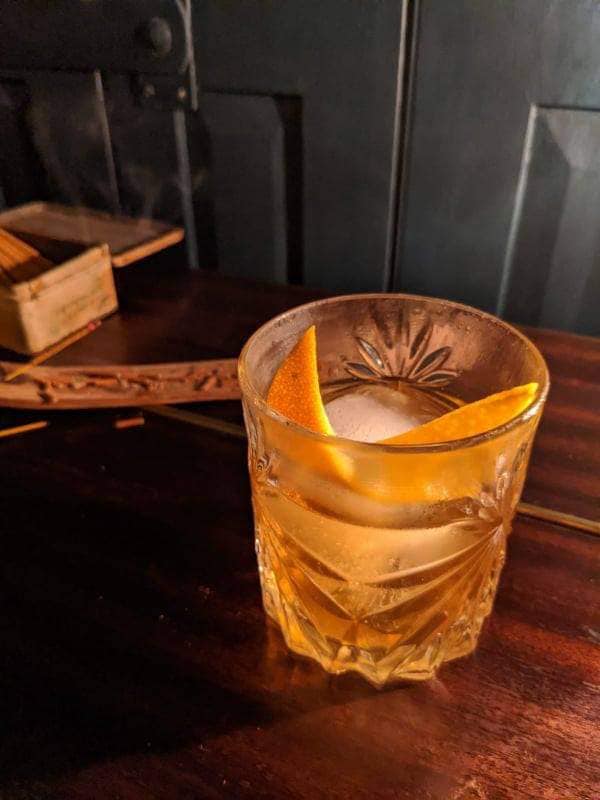 These super cool cocktail dudes are also reopening this weekend and you know how great those drinks are going to taste. I love an old fashioned in my old age – and the Prohibition tropical rum old fashioned sounds right up my street! Golden rum, homemade tropical syrup made with dried tropical fruits (pineapple, coconut, papaya and mango) finished with a dash of peach bitters. In!

Opera Grill have opted for a Lychee and raspberry daiquiri, a Strawberry, watermelon and hibiscus mojito and a Chocolate Sazerac (the defining feature of the Sazerac is its method of preparation, which commonly involves two chilled old-fashioned glasses. The first glass is swirled with a wash of absinthe for its flavor and strong scent). Sounds naughty! Cheers Sam! 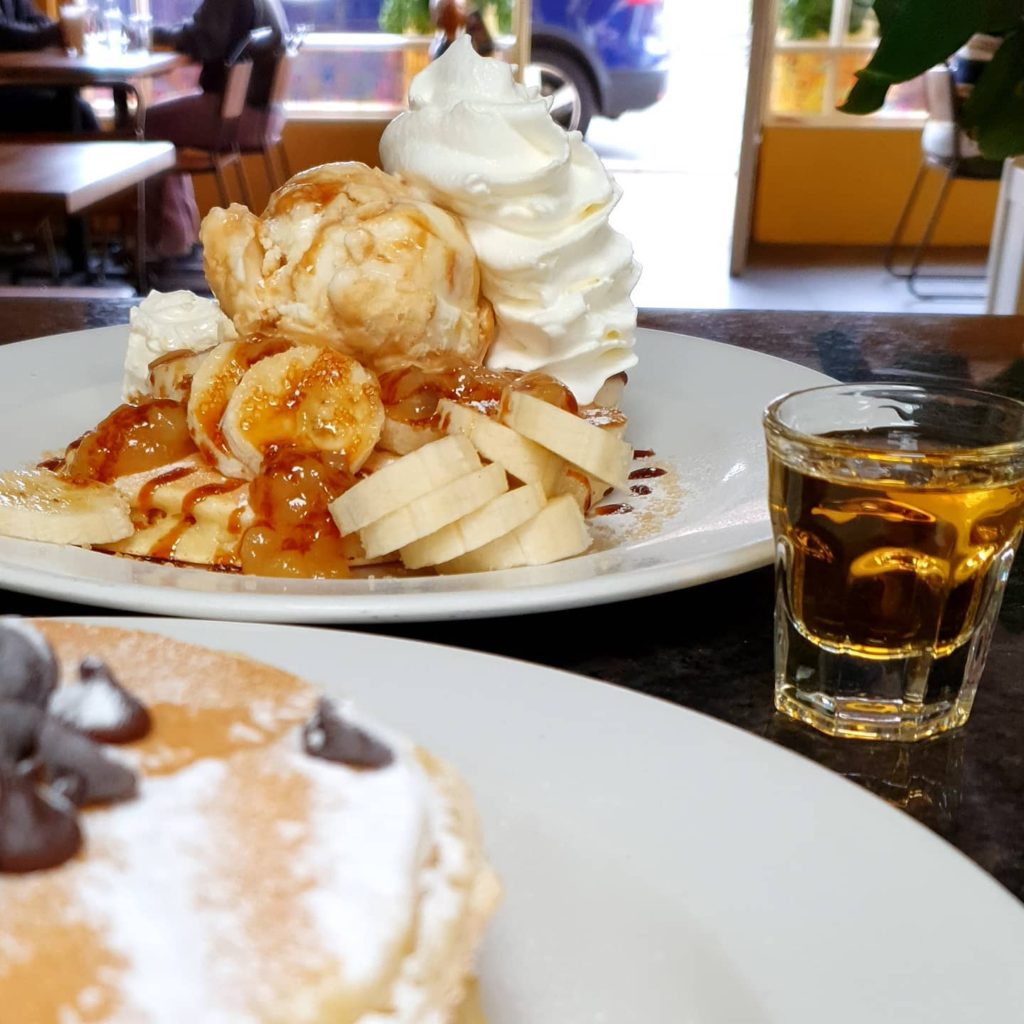 And now for something a little different and even more naughty … if you have a sweet tooth and a penchant for good rum then head straight to see our friends at Hanky Panky Pancakes, for they have created something oh-so-wicked and indulgent. Their Treasure Island Panc-tail is just the ticket. A scotch pancake with banana, homemade banana jam, brown sugar, mascarpone, banoffee pie ice cream, caramel sauce and squirty cream. Served with a shot of dark spiced rum. You must be 18+ to order it, but then you probably guessed that. I’ve had it – its sublime. 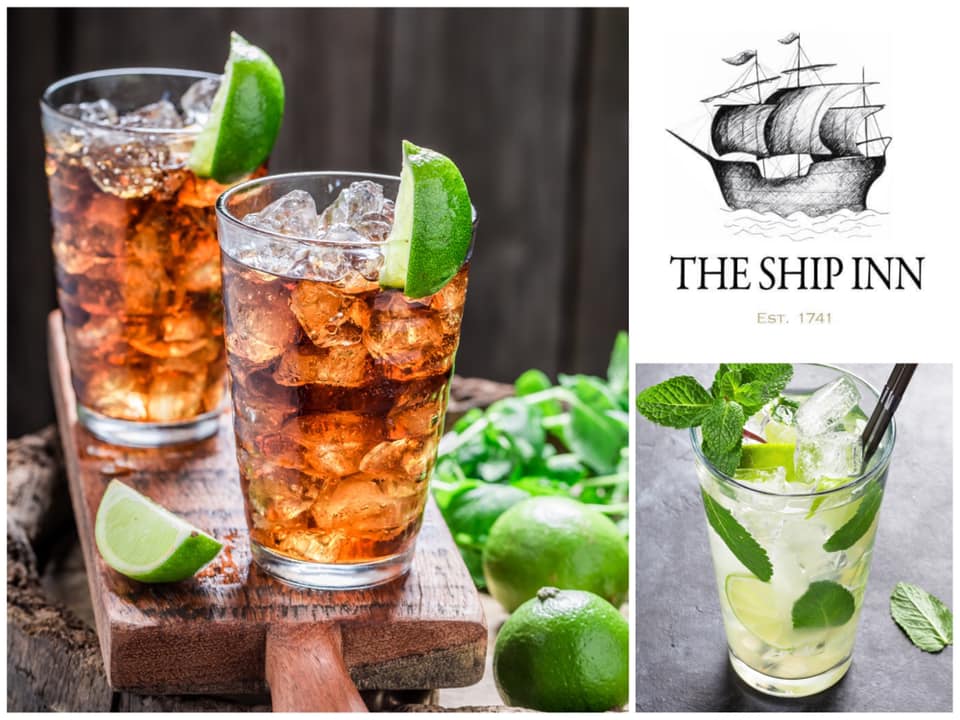 No rum story would be complete without a stop-off at The Ship Inn of course! Lance and his merry sailors will be serving a couple of classic rum cocktails this weekend to celebrate National Rum Day, including a Long Island Iced Tea and Mojito, plus a full range of rums to shiver your timbers (I’m so sorry, I couldn’t help it!).

Below Board (true location unknown) 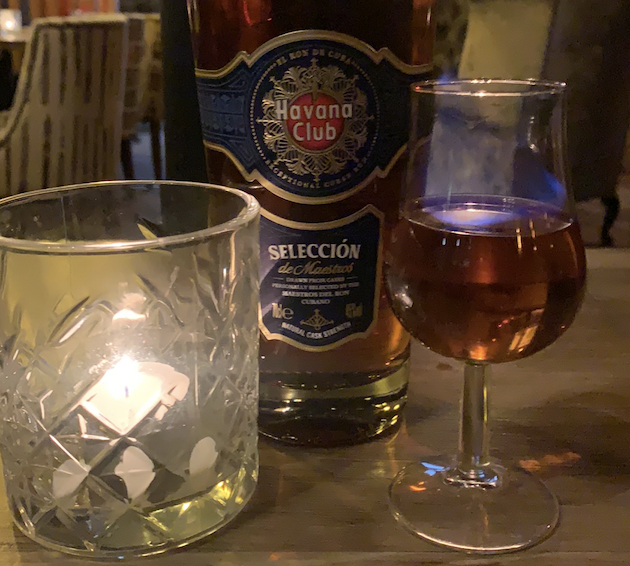 Guy Purser has been mixing up a bit of a storm down some stairs in a back alley – and I hope I’m able to find it as I seriously need to try his Il Capo (meaning the boss) – Havana Maestro, spiced rum, chocolate bitters and homemade banana syrup – served warm. Sounds dreamy Guy … where are you btw?!?